The magic of Key West

Key West has always had a magnetic allure for creative, adventuresome people with a thirst for life, knowledge and thoughtful discourse.  The list of famous characters that have spent time in Key West is much too long to include here, but let’s just say it is a wide and deep assortment of poets, presidents, smugglers, musicians, historians, authors, foreign dignitaries, moguls, actors and sun worshipers from all over the world.  What is it that attracts these amazing  characters to the tiny island of Key West, creating a spicy callaloo of personalities?  Certain things are obvious; beautiful water, weather, and tropical foliage are tempting enough.  But Key West has something special beyond those things.

It all goes way back 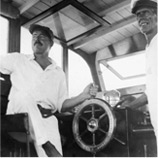 Key West’s rich history gives it a sort of mythical quality. The barren, dry islands were largely uninhabited before Ponce de Leon sailed by in the early 1500s.   Pirates, smugglers and shipwreck salvers were among some of the earliest European arrivals, which soon brought the Navy down to run them off.  Key West’s links to Cuba span several Cuban revolutions, and those ties brought refugees, including skilled cigar makers, to the island. At a high point, around the turn of the century, shipping, cigar making and sponging had made Key West the wealthiest and busiest city in Florida.

Then there is the unique atmosphere of creativity.   Artists and writers of all types have found their way to Key West over the years.  Hemingway came down in the 1920s because he loved the drinking, fishing and fighting that went on all the time in Key West back then. Yet Tennessee Williams, who enjoyed only one of the three, loved Key West just as much thirty years later.  Part of it is solitude.  Key West living is low on stress if you let it be.  Getting around is easy and relaxing, and summer is slow and languid.  The environment is perfect for letting the creative juices flow.  Another thing is a matter of inertia.  Creative, intelligent people want to be with other creative, intelligent people.  They move together in certain circles, and Key West in an inevitable stop for most.

Key West got its start as a creative community back in the 1930s, when Julius Stone, a representative from the Federal Emergency Relief Administration, was sent to Key West to try to save the once-wealthy community from bankruptcy.  Cigar making and sponging had both left Key West for other parts of the state, leaving only a meager fishing industry.  Stone set about redefining Key West as an artist colony in order to attract tourists and salvage the economy.  A creative man himself, Stone was known for his stylishness, mainly his signature Bermuda shorts, white shirt and tie.  As artists arrived and started selling their work on the streets and in modest galleries, tourists soon started to arrive as well.  Other artistic festivals and events were soon to follow.  The literary community descended practically en masse, with many of the best known poets and novelists of the day taking up winter residency.   The creative spark that still defines Key West today was born. 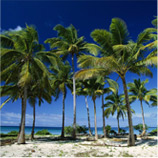 Key West just as vibrant and exciting today as it was back then.  The town is alive with music festivals, literary events, theater, art and great restaurants.

And then there is food.  Food and drink play a key role in the social scene here, be it one of the many food and wine festivals or a casual dinner party in a Key West kitchen.  The sea provides an almost endless variety of fresh fish and seafood, and fresh fruit grows in backyards.  Our Key West pink shrimp are famous the world over for their sweet, succulent flavor, and stone crab and spiny lobster are local favorites.  The native cuisine is influenced by Cuban, Bahamian and Spanish traditions with a tropical undercurrent.

So why come to Key West?  Plenty of reasons, as you can see.  But the main reason is to taste that “callaloo” that is the people who visit and live here.  Once you have a bite, you’ll be hooked for life.

The Rest of the World